- October 11, 2019
Long ago, a man named Sribatsa and his beautiful wife Ayana set out on a journey to traverse the lands of the earth. The evil eye had been cast upon Sribatsa due to an unfortunate run in with Saturn, the god of bad luck, and he and his wife had decided to leave their home in search of safe lodgings until the eye turned away. But one day as they were making their way through the woods, a horrible fate befell Ayana.

While Sribatsa and Ayana were crossing a river among the trees, Ayana slipped on a rock and fell into the water. She did not know how to swim, but the waters had mercy and did not drown her; her beauty was too rare and too pure to submerge forever beneath the river's rippling surface. The waters instead gently cradled the water-logged woman and placed her on the shore.

A group of nearby sailors observed this incident, and believed the woman had special influence over the river. They were envious of her power to control the waters, and kidnapped Ayana to steal this power for themselves.

The sailors tied her up in the steerage, where she was constantly plunged in darkness, surrounded by the dank smell of the sea and a sense of hopeless misery. Sometimes the rats that had snuck onto the boat and also taken up residence in steerage were the only living creatures she would see for days at a time.

Every morning, Ayana would wake and cry for hours, the tears rolling off her cheeks in waves. But a funny thing happened as soon as they hit the floor of the boat; the tears would bounce back as glistening diamonds. This was the work of the goddess of good luck, Lakshmi, who looked favorably upon Ayana. As the weeks passed, the piles of diamonds grew larger and larger, and the weight of the gems began to slow the passage of the boat. Ayana could hear the sailors cursing above deck, unable to figure out why their course had been thrown off.

Three months after Ayana had been wrenched away from Sribatsa, the steerage was so full of diamonds that even the rats had to find homes elsewhere on the boat. As Ayana awoke that morning and began to cry, the weight of the diamonds at last became too much for the feeble wooden planks. The rim of the ship began to crack, and as water leaked into the boat, it began to sink. By noon, the river had overtaken the boat and drowned the sailors, who paid dearly for the kidnapping of the innocent Ayana.

The waters once again saved Ayana and delivered her to shore, closeby to where Sribatsa was lodging in a thicket of trees. Hearing her cries, he ran to Ayana's side, and the two were finally reunited. The jewels on the sunken boat mixed with the waters of the river, and to this day the surface sparkles with Ayana's diamond tears.

Author's Note:
This story is a mashup of two Bengali folktales. In "The Origin of Rubies," a woman's blood falls to earth as the bright red stone we know as rubies. I loved this image and decided to write a version about the origin of diamonds, changing out blood for tears. The basis of the kidnapping plot comes from "The Evil Eye of Sani," in which Sribatsa's wife is kidnapped by sailors and held hostage until the goddess Lakshmi intervenes to help save her. I thought it would be a nice challenge to try and combine two stories to create something new. 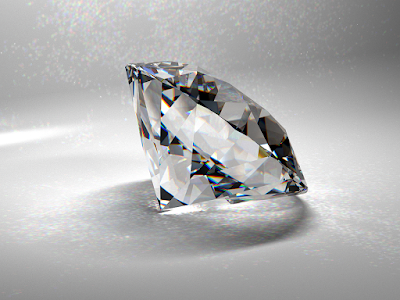