-Two versions: the moon in the moon and the hare in the moon
The Man:
-The man in the moon was originally a blacksmith
-Goes through a series of wishing to be something else (a stone, a stone-cutter, the sun, and finally the moon)
-Decides being a blacksmith is ultimately the best option, but it is too late; the man is destined to remain in the moon
The hare:
-The buddha was born as a hare
-Has three friends: monkey, jackal, and otter
-Decrees that alms must be given to the poor
-Each animal comes upon food in a different way, on a continuum of morality
-The hare has no food to give
-Decides to offer himself as food
-A brahmin seeks to test his sincerity, and builds a fire to roast the hare
-The hare jumps on, but is unaffected by the flames

-A seemingly more grotesque version of the more familiar tale of Beauty and the Beast
-A mother picks three roses for her daughter, but pays dearly when the owner of the roses (a basilisk) demands her daughter in exchange
-The daughter willingly goes
-Different from the B&B version, where Belle is extremely resistant to being confined to the castle
-Rather than an outsider killing the "ugly" version of the castle owner (ie the basilisk), the basilisk demands that the girl cut his head off
-The girl must be strong and perform an unthinkable act to save both her life (from being torn to           pieces) and the true form of the basilisk

-Pygmalion saw that the daughters of Propoetus lived wicked lives
-He was "offended by the failings that nature gave the female heart"
-Decided to live without a woman
-Created an ivory statue that he fell in love with
-Treated the statue as if it were a woman; dressed it, caressed it, lay it in bed
-Attends the festival of Venus and prays for a bride like the "ivory girl"
-The statue transforms from ivory to flesh

The Man in the Moon by  Katherine Neville Fleeson
The Hare That Was Not Afraid to Die by Marie L. Shedlock
The Three Roses by Josef Baudis
Pygmalion by Tony Kline 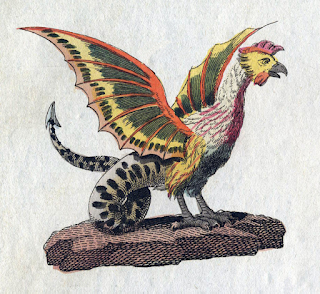