Topic Research: Letters to the Gods About the Sun and Moon

- September 08, 2019
I am going to try my hand at combining two of my topics, relating letters to the gods about the sun and moon...

Story #1: A Letter to Allah

I will base this story off of a tale in which a hodja believes that the moon has fallen into a well. The hodja writes to Allah asking how he can save the moon from its watery fate, and proceeds to describe all the methods he has thus far employed. A bucket cannot scoop up the silvery puddle and a hook cannot pierce its rippled surface. The hodja asks Allah what he needs to gather the moon from inside the well and return it to the sky, but soon begins to wonder whether Allah has let the moon fall for a reason.

Story #2: A Letter to The Sun and Moon Gods of the Blackfoot Tribe

This tale will be based on the legend of Star Boy (nicknamed Poia), born of Feather-Woman and Morning Star. His mother was banished from the sky for digging up a forbidden turnip, and passed away from unhappiness soon after. This letter will be written by Poia to his grandparents in the sky, the Sun and the Moon, asking them if he may ascend to the sky to have a notable scar on his face removed. He tells them of a special dance he has prepared to honor the Sun, and promises that when he returns from Sky-Country he will teach it to all the men and women of the land to honor the Sun.

This story will be written from the perspective of Huitzilopochtli's mother, whom he saves from a murderous plot orchestrated by his sister. His mother knows that Huitzilopochtli has a plan to remove his sister's head as punishment, which his mother agrees is a fair sentence for her thwarted wicked plans. But the motherly instinct in her urges Huitzilopochtli to turn her death sentence into something positive, so that she will have the chance to be honored and remembered. Huitzilopochtli comes up with a plan. After severing her head, he throws it into the sky, where it remains forever more as a light in the darkness. Her head illuminates the path toward seeking forgiveness amidst black thoughts and black deeds, and she is forever be bound to the task of seeking her own forgiveness. 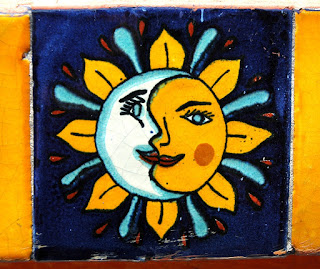