- September 19, 2019
It was a lovely spring day on Holloway Farm. The sun was shining, the breeze was crisp, and not a single cloud broke the crystal expanse of the sky. But the silence was cut by a loud and persistent bickering: the spinach just wouldn't seem to shut up.

"Really, I don't know who came up with the layout this year. I can hardly breathe with all these tomato plants so close by! And the roots of the cabbage keep creeping up; I'm tired of having to shoo them away."

The other vegetables rolled their metaphorical eyes (except for the potatoes, who could actually claim to have eyes). The rutabaga was particularly irked. She was an elderly plant who lived on the other side of the garden, and wished only for calm and quiet in the garden. The whining of the spinach had completely disturbed the serenity of the patch the vegetables called home.

"And the soil this year, it's terribly uncomfortable! Last year's tilling was so soft I might have imagined I was a bird nesting on a cloud, but this year it's downright prickly, and rocks keep poking at my side."

On and on the spinach went. The fermented grapes went around offering relief services to the other vegetables, and the onions, who were right next to the spinach and endured the brunt of the bickering, were quite drunk by nightfall.

As the sun disappeared and the stars winked into place in the sky, the spinach tucked up its leaves and drifted off to sleep. Snoring could be heard billowing from beneath the huddled greens, and as soon as she was sure the spinach was really asleep, the rutabaga roused the other vegetables.

"Something must be done about the spinach." The other vegetables agreed, and that night they came up with a plan.

The next day, when the little girl of the family who owned the vegetable patch came out to play in the dirt, the vegetables began whispering.

"They're calling it a miracle plant! Apparently it can make you the fastest runner on your softball team! Or the most popular kid in your school! I hear that if you eat enough of it, you start developing superpowers!"

The little girl overheard and became very curious. She went to her closest friends in the garden, the carrots, to consult with them.

"What is the plant all the vegetables are talking about?"

The carrots passed sly grins between one another. Being careful to whisper, one of the carrots said to the little girl, "They're talking about spinach! Eating it will give you magical abilities. But you must eat not only the leaves, but the root of it; that's where the true magic lies."

The little girl was delighted. She went into the house and asked her mother if she could eat some spinach. Her mother could not believe that an eight year old would voluntarily make such a request, and went out to the garden immediately.

And from that day forward, peace and quiet was restored to the vegetable garden.

Author's Note: This story is not based on a particular folktale, but it is inspired by part of a story from the canon of Turkish fairy tales. In the story of "The Wizard-Dervish," a youth and maiden run away to escape the maiden's evil mother. The maiden has magical abilities, and transforms herself and the youth into other forms to evade her mother's advances. These transformations range from an oven and a loaf of bread to a gardner and a garden to a pond and a duck. There was a mention of spinach during the garden transformation, and for some reason I latched onto that idea and wanted to bring the spinach (and the rest of the vegetable clan) to life. One clarification for potentially confused readers: when a potato sprouts, the growth is colloquially known as an "eye," which is where the reference in my story comes from. 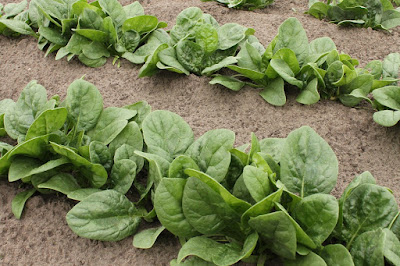 The noisiest of the vegetables. Source: pixabay