- September 28, 2019
Mole Rat and a Snake worked together as servants on a farm. Snake was not allowed inside the farmhouse on account of the unsightly skin that covered her body; it was pale, wrinkly, and hung off her bones at strange angles. She worked in the fields, weaving her way through the stalks of wheat and corn to catch intruding mice, always out of sight of the other animals and visitors of the farm. Mole Rat's coat was made up of a beautiful array of scales, which shone in the sunlight and reflected a vibrant prism of colors. She was thus employed inside the farmhouse, where she helped the farmer's wife in the kitchen. In the heat of the day, when poor Snake lay under the mercy of the sun, Mole Rat could be found chopping onions and humming along to a tune the farmer's wife liked to sing as they cooked together.

Although the farmer's wife was very kind to Mole Rat, the farmer was cruel and never missed an opportunity to jeer at Snake and make fun of her appearance. Snake passed many miserable years lingering in the fields and enduring the harsh words of the farmer. Her only reprieve were the nightly outings she had with Mole Rat, where the two of them would find a soft patch of grass and lie back to gaze at the stars. Over the years they had become intimately acquainted with the constellations, and would greet Orion and Big Dipper together as the world was tucked into bed under the blanket of night.

When the farmer's wife died, the burden of preparing all the daily meals began to fall entirely on Mole Rat, who quickly became overwhelmed. She went to Snake and proposed the idea of running away. Snake, who had been looking for a way out as long as she had been on the farm, quickly agreed, and the two friends set out.

They were small creatures and could not run quickly, but were attuned to seeking out nooks and crannies where they could hide along their runaway journey. In the morning, the farmer realized they were gone and promptly set out to find and catch them.

After days of traveling without stopping for food or water, Snake and Mole Rat could bear the ache in their bellies and the dryness of their mouths no longer, and moved out from a hiding spot in a hollowed tree trunk to go down to the river. They undressed, Snake laying out her skin and Mole Rat her scales. They dove into the river, where they hunted for fish and drank their fill from the cool running stream. But no sooner had they quenched their hunger and thirst than they saw the farmer off in the distance; he had spotted them and was running wildly in their direction!

Snake and Mole Rat scurried out of the river, and in their haste to evade the farmer's wrath they accidentally grabbed the other's clothes. They decided to split up to confuse the farmer, and before realizing their mistake, went bounding off in different directions.

It was not until they had traveled a far distance that both of the friends stopped and decided it was safe to dress. It was then that they realized they had not grabbed the proper clothes. Snake, who now possessed Mole Rat's dazzling outfit, was delighted by her new look. She became known to all the creatures near and far as the most majestic dresser of all the animals. But Mole Rat was miserable wearing the flacid, fleshy skin in place of her stunning coat of scales. The other animals mistook Mole Rat's pale covering for nakedness, and they shamed and avoided her. She became known to all as "Naked Mole Rat."

And that is the story of why mole rats today are naked.


Author's Note:
This story is based off of the story of the cow and the carabao, who like mole rat and snake ran away and accidentally switched clothes. In my experience, naked mole rats are viewed by many as very odd-looking creatures, and I thought it would be fun to write a story explaining the origin of this eclectic appearance. 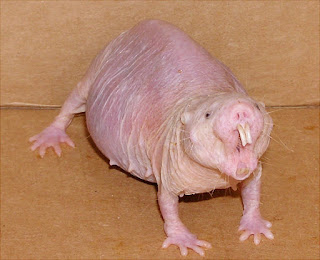