Week 11 Story: An Abundance of Children

Zara looked at the eighteen children prancing around her, their eyes filled with a youthful longing for sugar. She had already baked sixty trays of cookies that day, and it hadn't been enough for even half of her children. She had so many children by now that she couldn't remember the exact number, although it totaled somewhere in the 4000s. Her apron was covered in ribbons of butter and dusty trails of flour, and she couldn't fathom rolling out one more ball of dough.

"Tomorrow I will have cookies for you my children. Now run along to your other siblings." With disappointed sighs, the pack ran into the woods, where they knew they could find several hundred of their brothers and sisters.

Zara's overzealous fertility had been the result of seemingly benign encounter with a fish. As the first woman of earth, Zara had lived peacefully among the valleys and hills that rolled across the land. All was quiet and still back in those days, and she reveled each morning in the sunlight and slept each night under the stars.

Then one day, the plants and animals of the land went to God, declaring that they were lonely and longed for new friends. They knew Zara was the only one of her species, and suggested God create more creatures like her. Upon hearing this, God sent a fish that would forever change the course of life on earth.

As Zara was bathing that morning, the little fish sent by God began nibbling on her toes. Thinking nothing of it, Zara laid back in the crystal water and let the fish be. Unbeknownst to her, with each nibble the power of fertility in her body swelled.

That evening, Zara gave birth to her first child. She was thrilled! The newborn was the perfect image of humanity, and Zara vowed to protect the child with painstaking care.

It was after several other herds of children came by that afternoon begging for cookies that Zara decided she had had enough. She was drained from having to take care of so many little ones and recover each week from a new birth.

Zara went to the top of a nearby mountain and spoke to God. "Dearest Ruler, the world is filling up and I fear that soon there will not be enough room for all of the living creatures you seek to create. I speak on behalf of every mother who will come after me, and beseech you allow her to birth only one child in a year."

God heard Zara's plea and made it so. And that is why it takes nine months for a woman to have a
baby.


Author's Note: This story is based on a Cherokee myth. In the original, the first man and woman are brother and sister, and the brother hits his sister with a fish and instructs her to multiply. (I've always wondered why the fish is associated with fertility, and this story offered an intriguing explanation.) She gives birth seven days later, and, just as a I have replicated in my own story, continues to give birth every seven days after that. When their numbers begin to grow so quickly that it threatens the world, divine intervention saves the day by making it so that women can have only one child every year. I found this story very endearing, and I decided to write my own spin on it. I've changed a few elements and tried to add some humor to exaggerate the conundrum of the first woman. 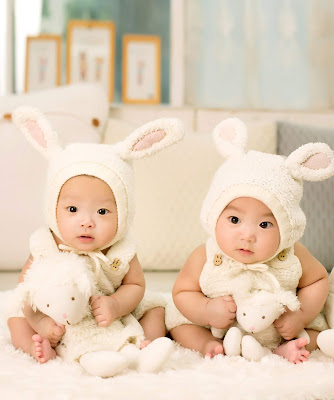 
Bibliography:
Mooney, James. (1900). How the World Was Made. In Myths of the Cherokee. Web Source
Story Week 11