- November 15, 2019
The Soldier and the Devil
-A soldier is going home with threepence
-He distributes each coin to a different beggar, each one in worse shape than the one before
-When he left the forest he was granted three bonns by the Lord for his charity
-He chose a pipe always full of tobacco, a purse always full of gold, and a knapsack that he could easily capture anyone in with a few simple words
-He went to a mill and asked for lodging, but the only available room they told him was haunted by a devil
-The devil appears and plays cards with him
-When the devil tries to tear him apart, the soldier captures him in his knapsack
-He leaves with it in the morning and asks a blacksmith to give the devil a good beating before he lets him go
-He hears of a lady who plays cards and always wins
-She is frustrated that she cannot win all the money from the soldier and steals his three magic gifts during the night
-He goes along his way, eats half an apple and grows horns, and then eats half a pear and loses them
-He gives the other apple half to the lady, who grows horns
-He tells her he can rid them if she gives his gifts back, which she agrees to
-Off he goes and captures death in his sack
-God tells him to knock it off because people can't die
-The soldier then goes to see what heaven looks like
-He's not dead so he cannot be admitted, although he makes it there eventually

Three Supernatural Stories
Witches at the Cross:
-Witches were said to climb and make merry around a cross, so a man goes to investigate
-He draws a circle around himself to stay hidden and observes the witches at night
-When he leaves the circle the witches chase after him
-One of them throws a burning broom at him and his door burns down
The Witch and the Horseshoes:
-A farmer's wife was a witch
-During a big festival, she anoints herself with ointment in the chimney and flies away
-Her husband follows and does the same procedure, and he is able to fly to where all the witches are having a feast
-To evade her husband the witch turns into a white horse
-He keeps track of her though, and has her shoe-d
-The next day the woman has four horseshoes on her two hands and feet
-She must remain like this forever 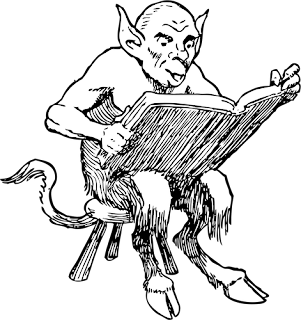