Week 13 Story: A Knight and Her Maiden

These were the simple words going through Britomart’s mind as she gazed at the fair maiden before her.

The wicked Enchanter turned and raised his staff to deliver a death blow to his prisoner, the maiden who stood bound to a pillar by magic rope. Britomart lunged between them in the nick of time, raising her sword and mortally wounding the Enchanter with a fierce blow. As he fell to the ground and life slipped away from him, the ropes around the maiden went limp and slipped off her frail body. Her skin had turned blue where the tight bonds dug into her skin.

“Noble knight! You have freed me from a life of misery in this vile place. How can I ever repay your kindness?”

Britomart heard these words, but could not comprehend them as she stood gazing at the maiden through the metal plate surrounding her eyes; she had seen this face before.

Many months prior, Britomart’s father, the King, had given her the gift of a magic mirror, which he had gotten from the Magician Merlin. Although the King did not tell Britomart of its magic abilities, it was rumored that when a woman gazed into it, she would see the face of the person she was to fall in love with. The King had decided it was time for Britomart to find a husband, and he gave her the mirror with the hope that it would pique her interest in the topic of marriage.

One night as Britomart was getting ready for a royal dinner, she pulled out the mirror. When she looked into it, two shining blue eyes met her own. The face staring back at her was surrounded by a halo of golden curls, a creature of rare beauty; Britomart had never seen a woman so fair. She sat gazing at the reflection for a long while.

That night at dinner, Britomart’s father revealed to her the power of the mirror and asked if she had looked into it. Britomart said she had, and pretended to have seen Sir Artegall, a knight well known in their kingdom. She feigned a description of a handsome knight with kind brown eyes, all the while remembering the sparking blue ones she had actually seen.

Realizing that Britomart was not truly listening to her, the maiden moved closer and said, “Good knight, I don’t mean to be brash, but I have been cooped up in this place for what seems like an eternity. I had lost hope that I would ever again feel the sun on my face or walk beneath the sky. I long to travel and see the world beside one so noble as you. Would you take me for your wife?”


Britomart’s heart fluttered. She slowly lifted her helmet, her own tresses falling around the gleaming shoulder plates of her armor. “If you will stand by me as my wife, the world shall be yours.” And together they rode off into the distance.

This story is based on the adventures of Britomart, a princess who disguises herself as a knight. I have combined two of her tales into one for this story. The first is the tale of when she gazes into the magic mirror (and in the original she does in fact see Sir Artegall). The second is the tale of her rescuing a maiden from a wicked Enchanter. In the original, however, Britomart delivers the maiden to a knight who had been her suitor prior to her capture, rather than falling in love with her. I decided to have some fun to see how I could write a story where two brave women form the power couple, without need for men to save them. 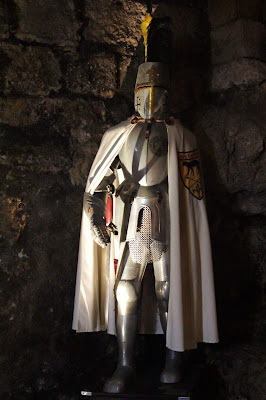 Macleod, Mary. (1916) How Britomart Rescued a Fair Lady from a Wicked Enchanter. In Stories From the Faerie Queene. Web Source